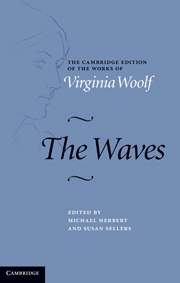 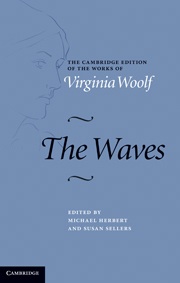 Friday saw the launch of the Cambridge edition of the works of Virginia Woolf, a project I have been involved in for the best part of a decade.

I thought I’d give a taste of the work we’ve been doing by presenting some of the findings from one of our two pilot volumes, The Waves.

Scholars have known for a while that Woolf was extraordinarily well read, but our research revealed just how detailed and wide-ranging her literary knowledge was. Virtually every page of The Waves contains at least one, often several, allusions or references to classical authors (such as Virgil and Catullus), Shakespeare, Milton, the Romantic poets (Wordsworth, Keats and especially Byron and Shelley), or Woolf’s contemporaries (in particular her friend T. S. Eliot whom many people believe provided the inspiration for Louis).

Although The Waves has often been thought of as an ‘abstract’ or ‘poetic’ novel, it is deeply rooted in the history and culture of its time. It contains many references to contemporary events. For example, when one of the characters, Bernard, reads in a newspaper that ‘a famous actress has been divorced’, this ‘actress’ can be traced to a living person. The Times lists five divorce cases between February 1929 and May 1931 (the period when Woolf was writing her novel) in which ‘actresses’ are either divorcing, or being divorced by, their husbands; the only one of these to whom the soubriquet ‘famous’ could reasonably be applied is the actress and singer Nancie Lovat (1900–46). Under the title ‘Actress’s Divorce Petition’, The Times of 8 April 1930 reports that ‘Mrs. Nancie Langlands, née Ellis, of Adelaide Road, Hampstead, the actress professionally known as Miss Nancy [sic] Lovat, now appearing in The Damask Rose at the Savoy Theatre, prayed for the dissolution of her marriage with Mr. Cecil Walter Langlands, a trainer of racehorses, on the ground of his adultery with a woman unknown’; the case was ‘adjourned’ in order ‘to give the husband an opportunity of stating the name of the woman with whom he was charged with committing adultery’.

One of our researchers, Dr Ian Blyth, also uncovered a short parody of The Waves written by Richard Mallett for Punch (The London Charivari, 18 November 1931). Entitled ‘The Flames’, this parody sets Woolf’s novel in an unnamed gentleman’s club. The style of the novel’s famous interludes are mimicked in a description of the flames emanating from the hearth in the centre of the room: ‘The fire had just been lighted. It held no warmth yet, except a pale suggestion of warmth, a timid ghost of heat to come. Little yellow flames rippled over the corners and folds of crumpled white paper, browning it, blackening it, consuming it, and then sliding gaily upwards to lick at the long yellow sticks’. In the main sections of the piece, four protagonists, Mr Smith, Mr Brown, Mr Jones and Mr Robinson, are in competition for the best chair in the room—the one closest to the fire:

“I am sitting in the best chair nearest the hearth,” said Mr. Smith. “I am glad they have lighted the fire.”

“I am cold,” said Mr. Brown, “but they have lighted the fire. I shall soon be warm now.”

“I am glad of this fire in a way,” said Mr. Jones, “it pleases me in a way. But it is an extravagance. We in the club will be made to pay for this extravagance.”

“I like to see the yellow light flickering,” said Mr. Robinson, “reflected in the leather chairs.”

Given Woolf’s interest in gender politics, I can’t help thinking this ridiculous portrayal of four men jostling for power would have appealed to her!

I’ll report some more of the edition’s findings for other volumes in future posts.